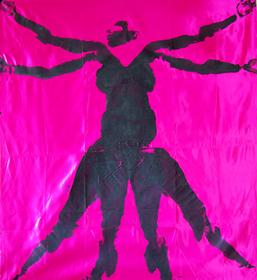 Born and raised in Rapid City, SD, Christie has had a

lifelong love of all things in art, science, and nature.

She has done art projects and experiments her whole

life.  As both a scientist and artist, she has a unique,

experimental approach to art that gives her art an

individual style and feel.  In high school, she took

courses in clay, photography, and drawing.  She later

attended school at the University of Hawai'i at Mānoa,

where she took courses in photography and glass, and

got an environmental science degree.  In Hawai'i she

started experimenting with body prints.  Initially an exercise in shapes and prints that she could make with her body, they became a symbol of her embracing her figure and shape.  After graduating with her bachelor’s degree, she showed body prints in several shows before returning almost full time to the sciences, occasionally working on smaller works, creating smaller paintings, jewelry, wire working, and glass. She completed her Master’s degree at South Dakota School of Mines and Technology in Atmospheric and Environmental Science in 2013.

After completing her degree, she spent a year on the Caribbean coast of Mexico.  As a former competitive swimmer and lover of the water, one of her pastimes there was swimming in a mermaid tail that she made.  Her mermaid swims inspired her to body paint, working on a larger scale again.  Her caribbean collections are somewhat of a science project as well as a jump into the fantasy of the existence of mermaids, transitions between sea and land based life, and mixed cultures.

After returning from Mexico, Christie was focused on mastering screen-printing as a means of scaling down her body prints, which are literally life-sized. Her screens have gradually increased in size; and she is now using a screen frame that is 8.5 ft by 5 ft.  She uses large screens as both a method of reducing larger prints to a more easily viewed size, and as a way to reduce her exposure to paint.

Screening allowed Christie to branch into other venues like ArtPrize 7 where she realized that art was an essential tool for outreach.  Her "Human Adaptations to Sea Level Rise" piece received a fair amount of attention, and led her to start her "Body Images" series which focuses on embracing strengths and letting precieved weaknesses fall into the background.

In 2018, Christie Started working as a Naturalist on cruise ships in Alaska and Hawaii.  All of her time with whales and sharks have led her to her newest projects!  Stay tuned for her whale and shark body prints!